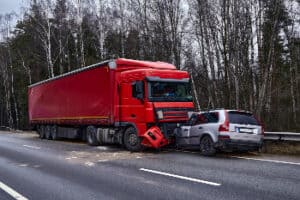 Residents in Austin, Texas have experienced a steady increase in the number of traffic accidents over the past few years. In 2020, reports showed that 18,293 vehicles in Texas were involved in collisions with large trucks and, in 2019, there were a total of 652 truck-related fatalities across the state. These statistics indicate that there is an increased chance of risk for drivers who share the road with commercial trucks.

Being involved in a serious Texas truck accident can be devastating and life-changing both physically and mentally. When you or someone you care for has been severely impacted by the aftermath of an Austin, Texas truck accident, your next steps can seem challenging without knowledgeable legal representation.

What Are the Common Causes of Austin Truck Accidents?

Whether it is related to faulty machinery inside the truck, negligent hiring by the trucking company, or a driver’s impairment or poor judgment, there are a variety of different factors that can cause a serious truck accident to occur. Some of the most common causes of truck accidents that occur in Austin, Texas, can include:

Regardless of the weather conditions and how they impacted the roads, a truck accident can occur at any time in Austin, Texas. When they do happen, it is essential to understand the potential severity of these accidents to prepare for what you or someone you care for may experience after a collision with a commercial truck.

How Severe are Accidents Involving Trucks?

Cases that involve large commercial trucks and vehicles often involve reports of severe injuries and fatalities. This often occurs because much larger vehicles have more difficulty braking and stopping quickly. Unfortunately, the sheer mass of a commercial truck applied to an impact can result in casualties. 97% of the deaths stemming from an accident involving a passenger vehicle and a truck are those of the passenger vehicle’s occupants. Without the protection of a large cab around you, you are much more vulnerable than the truck’s occupants.

Commercial trucks and vehicles can pose a significant threat if operated dangerously and without proper training. While trucks make up just 4% of registered vehicles on the road, they account for 13% of all traffic deaths, according to the National Highway Traffic Safety Administration’s crash tracking systems.

Even in injury cases, reports show that 74% of injuries from truck accidents happened to the occupants of the passenger vehicle. The size and weight of large commercial trucks give them a distinct advantage on the road when it comes to how much damage their vehicles sustain during impact. As a result, many truck drivers often endure less damage than the drivers that they collide with on the roads in Texas.

Although there are many different factors that play into a trucking accident occurring, reports indicate that Texas has the highest annual number of truck-related fatalities and injuries in the country. This is due to a number of reasons, but some of the most common causes are tied to the truck driver’s actions or negligent hiring and training by the trucking company.

The problem of frequent truck accidents occurs across the entire state of Texas, but there is a large concentration of truck accidents that happen in Austin. These collisions occur in cities that have higher populations and crowded roadways.

For many of the drivers in Austin, Texas, devastating or fatal truck accidents have become a regular occurrence on the roads. Motorists often report having a difficult time avoiding the possibility of a truck-related accident, especially in Texas, where more 18-wheelers are on the road than anywhere else in the country. Recent reports have shown that there are currently over 172,000 individuals employed as truck drivers in the state, with 15 out of every 1,000 jobs belonging to the trucking industry. This increased number of truck drivers on the road introduces more risks to other drivers.

Should I Gather Evidence after My Texas Truck Accident?

After experiencing a severe trucking accident in Texas, victims often wonder how they will afford the cost of their recovery. In most circumstances, victims of truck accidents in Austin that were caused by negligence may receive compensation for losses based on evidence from the incident. If you are able to obtain evidence at the scene of a truck accident safely, it can be useful in proving fault for the collision. Some of the most important pieces of evidence you can gather at the scene are photographs and videos of:

Ensure that you have a time stamp attached to your photographs and videos to prove the date and time of the incident. You may also back up these images using cloud storage to keep them off your device. You can also send these photos and videos to a trusted third party who can keep track of them in case they are needed to support your claim.

Many of the modern commercial trucks that are currently on the road in Texas come in different sizes based on the job that they are carrying out. Some varieties of commercial trucks transport oil across the state, while others are carrying cargo, livestock, or other consumer goods that require long-distance transportation. No matter what responsibilities the truck driver has or what kind of items they are shipping across the country, truck accidents can happen to anyone and can involve a variety of commercial trucks and vehicles, some of which may include:

Most commercial trucks have the potential to cause a serious and detrimental truck accident that can put the lives of others with whom they share the road in grave danger. Exercising extreme caution while driving near trucks or other commercial vehicles can help to prevent serious, detrimental accidents from occurring on the roads in Texas.

Which Truck Defects May Result in Serious Accidents?

As previously mentioned, many situations can create the conditions for a severe truck crash. Most of the reported truck accidents that occur in Austin, Texas involve a driver who has violated local traffic rules or engaged in distracted driving either by taking their eyes off of the road or not giving their full attention to the task of navigating a heavy commercial vehicle.

However, certain cases of truck accidents occur because of an issue with a commercial vehicle that happened during production. There are some instances in which the cause of a dangerous accident is revealed to be a defect in the commercial truck itself that the driver was unaware of before getting on the road. According to recent reports by the Federal Motor Carrier Safety Administration, some of the most frequently cited defects that can result in a serious truck accident include:

Many drivers in Texas are unaware that trucking companies are responsible for ensuring that their employees are competent and qualified for the job. This means that they must take safety precautions seriously and ensure that their truck drivers can perform all of the associated tasks that the role requires. In addition to maneuvering vehicles safely, truck drivers must maintain the safety of their vehicles. Failure to adhere to strict hiring standards may lead to holding the trucking company liable for negligence in its hiring and training practices.

If an insurance company or a lawyer is investigating a truck accident in Austin, Texas, they will often look to see if there are any of the main different types of defects on the vehicle that resulted in the accident. When Texas insurance evaluators examine trucks after an accident on the road in Austin, there are typically three main types of defects that are frequently found on Texas commercial vehicles. These types of defects include the following:

No matter what kind of defect may have resulted in a severe truck accident in Austin, Texas, any existing malfunctions in a truck’s ability to operate safely may provide victims with an opportunity to establish that fault lies with the other party or parties.

The size of a commercial truck or vehicle can have a devastating impact on the amount of damage that victims sustain from a serious trucking accident. Having worked on many cases of truck accidents in Austin, Texas, our lawyers have seen some of the most frequently cited injuries that victims experience after a serious collision, which include:

These injuries can have permanent and lasting damage to victims, regardless of the severity of the Austin truck accident they were involved in. After a serious truck accident, it is important to seek professional medical assistance as soon as possible to determine whether you have suffered any serious damage.