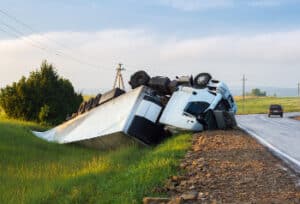 Truck rollover accidents are traumatic events that can leave victims with lasting physical and emotional injuries. Unfortunately, anyone who survives these types of crashes may find themselves having to juggle recovering from their injuries, mental anguish, and financial stress all at the same time. If you or someone you care about was involved in a truck rollover accident in Texas, the responsible party could be held accountable for your damages.

What Causes a Truck to Rollover?

Truck rollover accidents occur when the front wheels turn the truck more quickly than the cargo it is carrying. The faster the speed of travel, the more dangerous the result.

The Large Truck Crash Causation Study by the Federal Motor Carrier Safety Administration (FMCSA) examined 239 crashes in which a truck rolled over. Their in-depth analysis revealed the following causes of truck rollover accidents:

Large truck rollover crashes are often the result of driver negligence. Out of all 239 of the truck rollover accidents that were examined in the study, the truck driver was found to be responsible for all but 32 of the crashes.

Get in Touch With a Texas Rollover Truck Accident Attorney

If you have been in a rollover accident caused by another driver’s negligence, you may consider working with an experienced Texas truck accident attorney to pursue a claim against the parties responsible for your injuries and other losses.