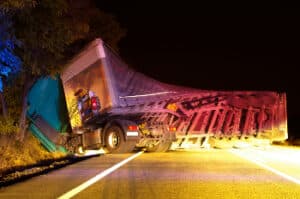 Semi-trucks are heavy, large vehicles that can cause catastrophic injuries and damage to smaller vehicles and their passengers when they collide. In 2019, The Lone Star State was a particularly dangerous state to drive in, especially when it came to trucks. That year, Texas saw 39,193 accidents that involved a commercial vehicle, with 543 of those crashes proving to be fatal. At Amaro Law Firm, our Fort Worth truck accident lawyers are dedicate to defending victims of these types of accidents because we believe that the injured deserve to see justice.

As an experienced truck accident lawyer in Fort Worth, Texas, Attorney R. James Amaro is familiar with the kind of devastation commercial trucks can cause when they are involved in a crash. If you’ve been hurt in a Fort Worth truck accident, you can count on our firm for legal guidance.

Common Types of Tractor Trailer Accidents We See in Fort Worth, Texas

As the population in Texas continues to grow, more and more trucks appear on our roadways each day. These 18-wheelers may take up a lot of space on our highways, but they are necessary for hauling the goods we need to survive. However, with each truck added to our roads, the risk of becoming involved in a truck crash rises.

Semi-trucks carry heavy cargo thousands of miles each week across our state, and these heavyweights do not have the ability to stop on a dime. Under ideal conditions, it would take a typical, fully loaded tractor-trailer 525 feet (nearly the length of two football fields) to make a complete stop from a speed of 65 miles per hour. This is one of the reasons why sharing the road with 18 wheelers can be so dangerous.

In the Fort Worth area, we often see these types of truck accidents:

What are Common Injuries after a Truck Crash in Fort Worth?

The average passenger vehicle weighs in at about 5,000 pounds. In comparison, a fully loaded big rig can clock in at up to 80,000 pounds. This means that when these massive tractor-trailers are involved in a crash, they can produce about 16 times the impact power of your everyday vehicle.

Despite recent advancements in auto safety, victims often find themselves having to recover from cataclysmic or permanent injuries after a truck accident. Steel, glass, and plastic can impact a person’s body at high speeds during an accident. Not to mention that fire, explosions, and toxic chemicals from a vehicle’s reservoirs can take an accident from bad to worse.

Injuries sustained in truck accidents frequently force victims to have to rearrange their whole lives in order to accommodate their injuries. A few examples of injuries that victims may sustain include:

State and Federal Regulations for Truck Drivers in Fort Worth, Texas

Commercial trucking has been the backbone of interstate and intrastate commerce for decades. Today, trucks account for 4% of all of the vehicles on our roads and are fundamental in keeping the Texas economy afloat. Unfortunately, trucks are a hazard to everyone who shares a road with them. Although trucks account for just 4% of all vehicles, trucks are involved in 11% of all auto fatalities.

Unfortunately, over 90% of motor vehicle accidents are caused due to negligence, and when truck drivers are careless with their driving, innocent, unsuspecting motorists, bicyclists, and pedestrians often end up paying the ultimate price. State and federal agencies have implemented regulations for truck drivers with the intention of making our roads safer for everyone.

All commercial vehicles engaging in interstate commerce must follow guidelines set by the Federal Motor Carrier Safety Administration (FMCSA). Any vehicle that satisfies any of the following criteria must abide by the FMCSA’s rules:

A skilled truck accident attorney could help victims suffering from truck accident injuries determine whether the vehicle they were struck by would be considered to be a commercial vehicle by the FMCSA. Any proof that a driver did not comply with state or federal trucking regulations could be used as evidence of liability against them.

How Do You Determine Who is Liable for a Fort Worth Truck Accident?

Commercial trucking is a complex area of law that is regulated by federal and state entities that covers their vehicles, drivers, and operations. Fort Worth victims who are not represented by a knowledgeable truck accident attorney may take a considerable risk when pursuing justice.

By hiring a Fort Worth truck accident attorney from Amaro Law Firm to represent your interests, you can ensure your rights are protected. Your attorney will begin their own investigation into the incident to determine liability for the crash. When it comes to commercial trucking accidents, liability could be held by any of the following entities, such as the:

Truck crashes could be caused by any of these parties, a combination of several of them, or something different entirely. Your attorney may call in an accident reconstruction specialist to perform a scientific analysis and interpretation of the crash. These experts have specialized training in accident reconstruction engineering and physics and will be able to determine what happened during an accident and who should be held liable.

There may be high-tech devices inside the cab of the truck that could help with accident reconstruction. Most trucks manufactured after the 1990s have a black box integrated into their engines. The black boxes, also known as electronic control modules (ECM) or event data recorders (EDR), store data such as:

Victims can also aid in the process of determining fault by providing any evidence they were able to collect after a crash. Helpful evidence could include:

Your Fort worth truck accident lawyer may be able to help you recover evidence that could be vital in holding negligent parties accountable for your truck crash. Whether it is data from a truck’s black box, hiring an accident reconstruction specialist, or contacting trucking companies for more information, your attorney will work diligently to ensure that your rights are being protected throughout the process.