NEGLIGENCE IN A NUTSHELL 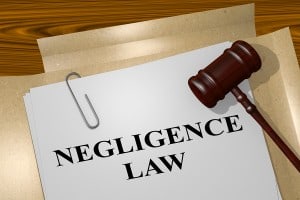 We all have heard of the term “negligence,” but what does it mean?  Negligence in a nutshell means failure to exercise the type of care that a reasonable person would exercise in the same or similar situation.  Therefore, when an individual is careless and injures another person, that individual is said to be “negligent,” and the injured person is entitled to be compensated.  Negligence is a legal theory that is heavily regulated in the United States since the government is interested in discouraging negligent conduct and redressing the injured parties.

There are certain elements that must be met in order for the injured person to prevail in a lawsuit against the negligent individual, namely: (1) Duty, (2) Breach of that Duty, (3) Cause in Fact, (4) Proximate Cause, and (5) Damages.  We will explain each one of those in turn.

We live in a society where, generally, any person owes a duty to the public to be careful and to refrain from doing acts that could injure another person.  In other instances, the law recognizes that a relationship exists between two or more persons, imposing a duty to one of them to act or refrain from acting in certain way.  The perfect example here is the common carrier-passenger relationship.  In the United States a common carrier is a business that transports people in exchange of a fee (e.g. bus, taxicab, airplane, passenger train, etc.).   Considering this “especial relationship,” carriers are subject to a high degree of care.

Generally, there are four different standards of care that will help determine whether a duty will be imposed on the negligent person or not.  The first one is the default standard of care, which is the reasonable prudent person under the same or similar circumstances standard.  The second one is the “children standard.”  The majority of the states in the United States have adopted a hybrid standard of care for children:  Subjective, by looking at that particular child and objective, by comparing that child with other kids with the same age, experience, and intelligence.  In some states, a kid under 7 years of age cannot be negligent.  The third standard is the “professional standard,” which applies to professionals like lawyers, doctors, accountants, architects, etc.  Custom is what defines the standard of care, so a deviation of that custom is a breach of the duty.  Finally, there is a standard of care imposed by statute, the breach of which is known as negligence per se.  The court will determine whether a duty existed in a particular case since it is a question of law.

A person may be found liable for negligence if he deviates from any of the standards of care discussed above.  For example, if a doctor provides medical treatment that is not consistent with the custom in the relevant geographic community where the doctor practices, and as a result of that a patient is injured, then that doctor has breached a duty of care measured by the medical professional standard.  For specialists in a certain field a national standard will be applied, and for general practitioners a local standard.  The issue of whether a person breached a duty is a question of fact and will be decided by the jury.

In a negligence action, the injured person must prove by preponderance of the evidence, meaning more likely than not, that the defendant’s conduct actually caused that person’s injuries.  This element is what ties defendant’s breach of duty with plaintiff’s injury and which is commonly referred to as the “but-for” causation element.  In other words, the plaintiff must prove that BUT FOR the negligent conduct of the defendant the injury would not have occurred.

Generally, the negligent person will only be found liable for those foreseeable injuries.  In other words, even if the defendant’s conduct was the actual cause of plaintiff’s injuries, the defendant will not be liable if the injuries that the plaintiff suffered could not have been foreseen. Note, though, that if the injured person is suffering from a previous physical or medical condition and the negligent conduct makes it worse, then the defendant will be liable.  You take your victim as you find him.

Damages must always be proven in negligence cases, therefore, if the injured person does not prove damages he loses.  The damages can be compensatory, which are designed to place the injured person in his pre-injury position.  However, they have to be foreseeable and reasonably certain as opposed to speculative and unavoidable.  Compensatory damages can be categorized in special damages which are pecuniary in nature like medical expenses, lost wages, repairing, or they can also be categorized as general damages which can be controversial, and the most common ones are pain and suffering.  Generally, punitive or exemplary damages do not apply in a negligence action.

If you or a loved one has been injured by the negligence of another person we recommend you to contact us immediately for a free consultation.