Amtrak Train Derailment in Washington Kills 3, Injures More Than 100 Others 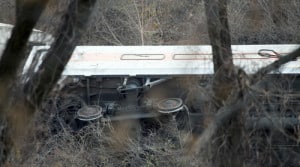 At about 7:40 a.m. on Monday Dec. 18, the Amtrak Cascades 501 train derailed near DuPont, Washington, about 20 miles outside of Seattle. Traveling around a curve at 80 mph, nearly three times the speed limit for that area, the train derailed at an overpass, hurling 13 of its 14 cars off the tracks, with some falling on to Interstate 5 (I-5) below.

According to investigators, five cars and two semi-trucks were struck by falling train cars. While none of the vehicle occupants was reportedly killed in this horrific wreck:

Local law enforcement and authorities with the National Transportation Safety Board (NTSB) have not identified the cause(s) of this crash due to the ongoing investigation. Crew performance, train mechanics and track features are just some of the factors that authorities will likely look into as the investigation continues.

Washington Governor Jay Inslee has declared a State of Emergency in Pierce and Thurston counties, ordering local authorities to “utilize state resources and to do everything reasonably possible” to help and respond to and this horrific train accident.

Train Derails on First Trip on a New Route, on Newly Upgraded Tracks

Jointly owned by the Washington and Oregon departments of transportation, the Amtrak 501 train serves 18 cities along the I-5. Prior to Dec. 18, the train had been operating on a longer, slower route that followed the edge of the Puget Sound.

On the morning of Dec. 18, the Amtrak 501 train was embarking on its first trip along a new, more direct route via tracks known as Point Defiance Bypass. According to the Washington Department of Transportation, these tracks have recently undergone extensive upgrades and testing, as part of a $181 million project to stabilize the tracks and make them safer for commuter operations.

Sound Transit, the company that owns the Point Defiance Bypass tracks, was also reportedly contracted to oversee the track upgrades and testing.

While the derailment raises many questions about the nature and extent of the track upgrades and testing, authorities have reported that safety technology known as Positive Train Control (PTC) was not operational on Dec. 18. PTC can automatically slow or stop a speeding train, leading some to believe that this technology could have prevented the derailment.

According to a spokesperson for Sound Transit, PTC was scheduled to be activated in the spring of 2018.

Tragically, some predicted that the Amtrak 501 train would be involved in a fatal accident well before Dec. 18. In the weeks leading up to this derailment, Lakewood Mayor Don Anderson warned:

Come back when there is that accident, and try to justify not putting in those safety enhancements, or you can go back now and advocate for the money to do it, because this project was never needed and endangers our citizens.

The devastating Amtrak accident on Dec. 18 is not an isolated incident, as Amtrak trains have been involved in several serious wrecks in recent years. The following presents a timeline of some of the most notable and catastrophic Amtrak train accidents that have occurred in the U.S. since 2011:

Amtrak has canceled various Cascade train operations as the investigation and cleanup efforts continue. Passengers are encouraged to check, change or review refund information for their train travel plans by calling (800) USA-RAIL or by clicking here.