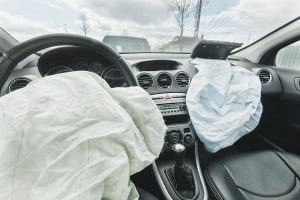 Japanese Airbag Manufacturer Takata initially announced a defect with its airbags in April 2013, leading to a plethora of recalls.  At least 42 million vehicles from 19 major automakers have been affected from the airbag recall.  The chemical used as a propellant in the airbags was discovered to be highly volatile in hot, humid climates.  The chemical would explode leading to the airbags to be unexpectedly deployed.  Some of the explosions launched shrapnel into the driver and front passengers.  There have been at least sixteen reported fatalities and hundreds of injuries from the airbag.

In May of 2015, the National Highway Traffic Safety Administration ordered Takata and automakers to recall the defective airbags and repair or replace them.  A total of 69 million inflators in 42 million vehicles are to be recalled and repaired by the end of 2019.  By November of 2015, the NHTSA fined Takata a record $200 million for the crisis.  Now, the Department of Justice and Takata have reached a settlement.

The National Highway Traffic Safety Administration created a website to track the increasing number of recalled vehicles. Visit https://www.safercar.gov/rs/takata/index.html to view the list of recalled vehicles.  Alternatively, if you know your Vehicle Identification Number, often referred to as VIN, you may check your vehicle for recalls at https://vinrcl.safercar.gov/vin.  If your vehicle is on either list, you should contact your vehicle manufacturer immediately to have the defective airbag replaced.

If you or someone you love has been injured, or if a loved one has lost their life, due to the defective airbags, call the offices of the Amaro Law Firm today to find out how we can help you with a Takata airbag recall lawsuit. Our attorneys can help you recover costs from hospital stays, physician’s office visits, lost wages and pain and suffering.  Our friendly staff will ask a few questions about your case and connect you to a recall lawsuit attorney. Contact us today for your free consultation.