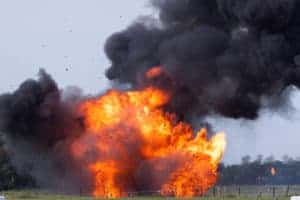 Five gas line workers in Santa Fe are currently in critical condition after a gas line explosion hurled flames several feet into the sky above. According to authorities, the gas line burst just after 6 p.m. on Thursday June 6th.

The workers, who were Dayton Pipeline employees working under contract for CenterPoint Energy, were reportedly preparing a gas line when the explosion occurred. While one of the injured was airlifted to a nearby hospital, the others were taken by ambulance to John Sealy Hospital in Galveston for the treatment of severe burns and other catastrophic injuries.

As the injured workers fight for their lives, many are now wondering what exactly caused the gas line to explode. While answers are eagerly awaited, authorities have disclosed few other details due to the ongoing nature of the investigation into this event.

What Could Have Caused the Santa Fe Gas Line Exposure?

Answers about the causes of the Santa Fe gas line explosion may come soon. In the meantime, a major concern is whether this explosion could have been prevented—and whether negligence may have contributed to it in any way.

Tragically, negligence plays a role in causing gas line explosions, injuries, and deaths all too frequently. When it does, it commonly takes the form of:

When any form of negligence is involved in a gas line explosion, injured workers will have options for holding the negligent parties accountable and seeking the justice and financial recovery they deserve.

Please don’t hesitate to contact us if you have any information about this incident – or if you have been harmed in an accident and you need helpful advice regarding your legal options.