A bus wreck occurred around 2:00 a.m. while traveling on I-25 through New Mexico Highway. The devastating wreck involved three other vehicles, killed 3 people, and sent 24 others to the hospital with injuries 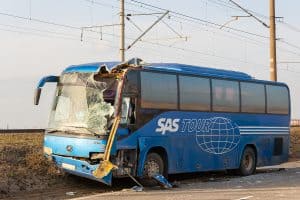 The tour bus was on its way to El Paso from Denver, carrying 35 people including the two bus drivers. The bus had tried to avoid a collision on the highway involving a car and a pickup truck. While trying to avoid the collision, the bus lost control and flipped over on its side. After the bus crashed, it was struck by a semi-truck causing further damage and injuries.

The Rio Ranch Fire Rescue had to remove several people trapped in the bus using a tool that pries open parts of a vehicle.

Of the three killed in the crash, one was a passenger in the car that struck the pickup truck from behind. According to authorities, emergency responders treated 38 people on the scene with injuries ranging from broken bones to head and internal injuries.

The bus involved is operated by El Paso-Los Angeles Limousine Express, and have said that they will help provide transportation for any passengers involved leaving the hospital.

Twelve of the injured were taken to University of New Mexico Hospital, while eight others were taken to a different hospital. Authorities say that six of those eight have been treated and released.

The El Paso-Los Angeles Limousine Express has a “satisfactory” rating from the U.S. Department of Transportation, the highest rating you can receive. The bus company does still have a record of accidents in the past. In 2014, the L.A. Times reported that the company was involved in a bus crash that killed four people in California.

If you have any information regarding this bus accident to share with authorities, we encourage you to confidentially share it with our firm.