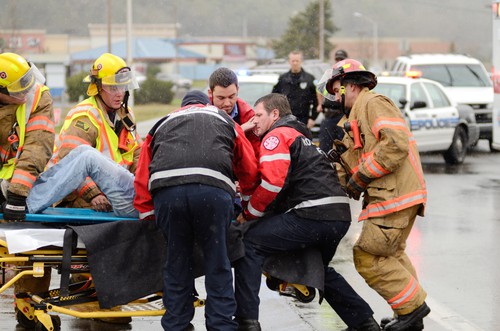 Two 18-Wheelers, a Box Truck & a Passenger Vehicle Were Involved in a Chain-Reaction Crash That Left Few Survivors

A truck driver and two people in a passenger vehicle were killed in a horrific truck accident in Beasley, Texas, on Monday, November 8, 2021. The crash occurred around noon at Vincik Ehlert Road and FM 360. It reportedly started when a car ran a stop sign at FM 360.

The driver and passenger in the car were two of the victims killed in this accident. The third victim was one of the truck drivers.

Here are more details about how this wreck happened.

Authorities report that, after the car ran the stop sign and hit an 18-wheeler, that truck drifted into oncoming traffic. That’s when it slammed into another 18-wheeler in a head-on collision. At that point, both 18-wheelers burst into flames.

The trucker in the semi that had hit the car was able to escape, and his semi was completely burned in the fire. Though injured, he was reportedly conscious when emergency responders took him to Memorial Hermann Sugar Land Hospital.

The driver of the other 18-wheeler suffered fatal injuries in this crash.

Authorities announced the crash a couple of hours after it happened, noting that the roads would be closed as the investigation continued and the wreckage was cleared.

Two 18-wheelers, 1 passenger vehicle & a boxcar were involved in a 3-person fatal accident around noon at Vincik Ehlert Rd./FM 360 in Beasley. The 2 18-wheelers were destroyed by fire following a head-on collision. The roadway is blocked and expected to be closed all day. pic.twitter.com/RsRxm2zu5z

Now, they are urging anyone with information about the crash to come forward and share it.

If you were a witness to this accident or have potential knowledge, no matter how minor it may seem, please contact us. We can make sure it gets to the right place.

Accident photos, videos, witnesses, and more could help uncover key facts about how this crash happened and what could have been done to prevent it. You can email us here, 24/7.