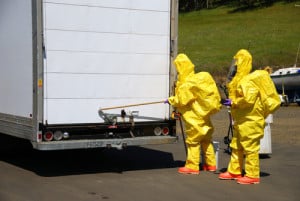 Shortly after 9 am this morning, an 18-wheeler truck crashed into a Japanese restaurant in Fort Bend. The truck driver, who suffered serious injuries in the crash, reportedly died in the hospital from his injuries. Three others who reportedly suffered minor injuries were transported to a local hospital for treatment.

According to the Fort Bend County Sheriff’s Office, the truck was heading southbound on Grand Parkway when it swerved across the median and crashed into the Shogun Restaurant, located on the 7300 block of State Highway (SH) 99, next to the former Palladium Theater. While the investigation is ongoing, at this point, authorities believe that a medical condition caused the trucker to veer over the median.

Details regarding the nature of hazardous gasses being transported by the truck and whether these gasses were released have yet to be made public. Authorities did, however, evacuate the building following the crash.

Additionally, the northbound lanes of Grand Parkway (at West Bellfort) have been closed as the cleanup and investigation for this crash continue.

Local reporters are continuing to follow this investigation and issue updates as new details become available.

Hazardous Materials (Hazmat) Trucking Regulations: What You Need to Know

This hazmat truck accident raises some important points about the rules and regulations for transporting hazardous materials – and who can be liable for hazmat truck wrecks and releases.

In particular, truck drivers and motor carriers who transport hazardous materials are required to comply with special regulations, in addition to standard trucking regulations pertaining to the transport of nonhazardous cargo.

These hazmat trucking regulations are set by federal and state law, and they pertain to matters like (but not exclusive to):

Although hazmat trucking regulations are focused on promoting the safe transport of hazardous materials, today’s 18-wheeler crash in Fort Bend reveals how accidents involving these trucks still occur and have the potential to cause real harm to many.

1: According the FMCSA’s Guidelines on How to Comply with Federal Hazmat Regulations