In an effort to prevent truck wrecks and save lives, federal regulators have proposed a new speed limiting rule for certain commercial trucks and buses traveling on U.S. highways. This proposed regulation, which has yet to be finalized or enacted, could have various impacts on truckers, trucking companies and the motoring public at large.

The following presents more details about this proposed rule, along with the potential benefits of – and opposition to – it.

Hurt in a Truck Wreck?

The truck accident lawyers at the Amaro Law Firm have extensive experience representing victims and families from across the U.S. in various types of truck wreck claims. Our record of success in these cases has earned us 5-star ratings on Google and Facebook.

We are ready to meet with you, review your potential truck accident claim and explain the available legal remedies. If you cannot visit our offices, we provide virtual and mobile consultations.

Background: The Details of the New Speed Limiter Rule 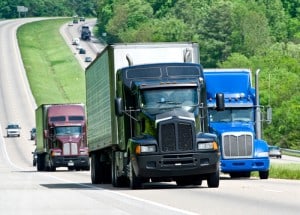 According to the terms of the proposal speed limiter rule, the regulation would require “new multipurpose” vehicles weighing at least 26,000 pounds to be outfitted with “a speed limiting device.” This rule would reportedly apply to:

The mandate would require speed limiting devices to be “set to a speed not greater than a specified speed and to be equipped with a means of reading the vehicle’s current speed setting and the two previous speed settings.” These devices would have to be maintained in the required vehicles “for the service life of the vehicle.”

At this point, many details of the proposed rule still remain unclear, including:

Though some important details about the new proposal remain unknown, various parties, including transportation safety officials, have already expressed support for this rule. That is largely because, if enacted, the rule is expected to result in benefits like (but not necessarily limited to):

There are significant safety benefits to this proposed rulemaking … In addition to saving lives, the projected fuel and emissions savings make this proposal a win for safety, energy conservation, and our environment.

Opposing the speed limiter proposal are various parties associated with the trucking industry (including the American Trucking Association and the Owner-Operator Independent Drivers Association).

This backlash has primarily stemmed from the negative impacts that those in the trucking industry believe speed limiters would have, like (but not necessarily limited to):

Find Out More about Your Potential Truck Wreck Claim: Contact a Truck Accident Lawyer at the Amaro Law Firm

If you or a loved one has been hurt in a truck wreck, contact a truck accident lawyer at the Amaro Law Firm to discover more about your legal options for financial recovery.

We are ready to provide you helpful legal advice and the advocacy you need to position your claim for a successful outcome.

1: According to the latest data from the National Highway Traffic Safety Administration (NHTSA)