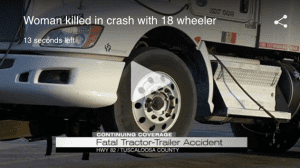 On September 12, 2016, a 63-year-old woman was killed when she collided with a Rogers Cartage 18 wheeler that was disabled in the roadway.  Rebecca Maddox of Centreville, Alabama was pronounced dead at the scene near Duncanville, Alabama.  The driver of the 18 wheeler was not injured.

The full details surrounding the wreck have not been released as authorities investigate the incident.  However, under federal regulations, drivers must use their hazard flashers if their vehicle is stopped on the traveled portion of a highway.  The driver then has to place warning devices in the direction of the traffic at specified distances.  Because this wreck happened during daytime hours, drivers must place three reflective triangles approximately 10 feet from the disabled commercial vehicle.  The warning devices are mandated to warn traveling vehicles that a large tractor trailer is disabled in the traveling portion of a highway.

Our investigation has discovered that Rogers Cartage has a history of safety violations.  According to federal data reports, the company has been cited for 120 vehicle maintenance violations and has been involved in 26 crashes in the past 24 months.  Based on this information and the wreck details, it seems pretty evident that there were some serious safety issues at this trucking company.Federal law imposes very strict regulations on commercial truck drivers in order to protect the public from preventable accidents such as this.  Anyone who continuously disregards the federal regulations needlessly puts the public at risk.  These companies and individuals must be held accountable for their actions so that our roads can be made safer.

The Amaro Law Firm litigates 18-wheeler cases nationwide and is investigating this 18 wheeler wreck.  Therefore, we encourage anyone with information about the wreck to come forward so that we may share the information with authorities.  Whether you witnessed the wreck, passed by after it occurred or while the wreck was being cleared, or are a relative of the deceased or injured, do not hesitate to contact us by filling out this form.  You may share the information anonymously.

Please be aware that it is illegal for a law firm or anyone being paid by a law firm to solicit legal services to the victims or representatives of victims in personal injury matters.  If you or a loved one have been approached by a stranger who is attempting to steer you to an attorney or law firm for legal representation (e.g., funeral home, wrecker driver, medical provider, etc.), that conduct may constitute illegal barratry and solicitation subject to criminal and civil prosecution.